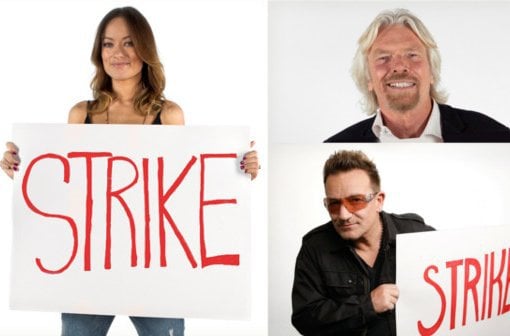 Los Angeles, CA (May 22, 2013) Richard Branson, Olivia Wilde and Bono are the most recent set of celebrities to publicly declare their support for Matt Damon's Toilet Strike in a PSA, released today. In doing so, they announced their protest of the global water crisis and pledged "...not to go to the bathroom until everyone in the whole world has access to clean water and sanitation."

On February 12th, Matt Damon held a dramatic press conference in which he originally announced his "toilet strike." This latest PSA comes as a follow up to Jessica Biel, Jason Bateman and Josh Gad's March 13th declaration to show their support for the Toilet Strike. Branson, Wilde and Bono are the latest to commit to take action in an attempt to accelerate movement towards providing safe water and sanitation to the 2.5 billion people who do without.

"I want to support creative organizations that truly impact the lives of those in need, particularly those living in extreme poverty," says Wilde. "Water.org makes a real difference around the world, and in Haiti, a country that I care deeply about. The Toilet Strike is a creative campaign I can get behind, capturing people's attention and building a social community."

In the PSA, Branson, Wilde and Bono express their support for the strike, and divulge how Damon convinced them to take action against the water crisis. Bono reveals, "I remember when Matt first brought up the idea. It was a meeting of the Illuminati, actually." Branson, Wilde and Bono remark on the heated nature of the conversation that ensued, and how they were ultimately won over by Damon's plea.

Co-founder of Water.org, Damon makes an appearance in the PSA, inviting all to "Join the millions of famous people who've already joined" his strike.

Water.org invites viewers to http://strikewithme.org where they can "Support the Strike," subscribe to upcoming videos, take action, and learn more. To view the PSA and the February 12, 2013 Damon Press Conference: youtube.com/water.

For more than two decades, Water.org has been at the forefront of developing and delivering solutions to the water crisis. Founded by Gary White and Matt Damon, Water.org pioneers innovative, community-driven and market-based solutions to ensure all people have access to safe water and sanitation; giving women hope, children health and communities a future. To date, Water.org has positively transformed the lives of more than 1,000,000 individuals living across communities in Africa, South Asia, Latin America and the Caribbean; ensuring a better life for generations ahead.

Water.org and the infinity mark are trademarks of Water.org, Incorporated. Other trade names used are the property of their respective owners and do not represent an endorsement.

Water.org advocates healthy, sanitary, and charitable lifestyles. Proper hygiene and sanitation are necessary for a healthy life in our communities. Matt Damon's Toilet Strike is a comedic online campaign to raise awareness for the worldwide safe water and sanitation crisis.