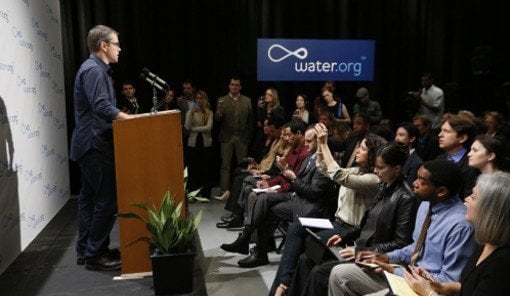 Strike With Me to Raise Awareness

Matt Damon protests lack of access to a toilet or basic sanitation for 2.5 billion people

Los Angeles, California. February 12, 2013. Matt Damon, co-founder of Water.org, held a press conference where he announced that to protest the fact that 2.5 billion people lack access to a toilet or basic sanitation, he will be going on a "toilet strike*." Damon remained afterward to make appearances in videos by top talent on the YouTube platform designed to bring awareness and activism to the global water and sanitation crisis.

At the news conference, Damon pointed out that "780 Million people, that's twice the population of the United States, lack access to clean water." He then announced his "toilet strike," declaring: "In protest of this global tragedy, until this issue is resolved, until everyone has access to clean water and sanitation... I will not go to the bathroom."

Damon challenged reporters to tell him how they celebrated World Toilet Day; observed annually on November 19th, it aims to break the taboo around toilets and draw attention to the global sanitation challenge. Hearing no meaningful responses, Damon asked the press: "[Does] anybody have any idea what invention has saved more lives than any other in the history of humankind? "The Toilet." To underscore his point about the sanitation component of the water crisis, Damon added "More people have cell phones than toilets."

Damon is also working with a group of YouTube creators on appearances scheduled to debut on each creator's YouTube channel, including ShayCarl, EpicLloyd, WheezyWaiter, LivePrudeGirls, Smosh, Stan Lee, Lisa Schwartz, and John Elerick.

Gary White, Water.org co-founder and CEO said: "Matt's strike announcement and the vlogger videos are designed to start an online conversation that can engage people across the digital landscape, and we hope people will share the video, and respond to it with their own thoughts..." Gary added, "I've been working on the water crisis for over 25 years and the interest and excitement for our work against one of the world's most solvable problems has never been more real. We are confident we will solve this crisis in our lifetime."

Jessica Mason, YouTube for Good Manager added, "Water.org's latest public awareness campaign shows how nonprofits can use video to raise awareness about important issues. YouTube is committed to helping more nonprofits reach global audiences with important messages and is thrilled that Water.org is leading the way."

For more than two decades, Water.org has been at the forefront of developing and delivering solutions to the water crisis. Founded by Gary White and Matt Damon, Water.org pioneers innovative, community-driven and market-based solutions to ensure all people have access to safe water and sanitation; giving women hope, children health and communities a future. To date, Water.org has positively transformed the lives of more than 1,000,000 individuals living across communities in Africa, South Asia, Latin America and the Caribbean; ensuring a better life for generations ahead.

Water.org and the infinity mark are trademarks of Water.org, Incorporated. Other trade names used are the property of their respective owners and do not represent an endorsement.

Water.org advocates healthy, sanitary, and charitable lifestyles. Proper hygiene and sanitation are necessary for a healthy life in our communities. Matt Damon's Toilet Strike is a comedic online campaign to raise awareness for the worldwide safe water and sanitation crisis.