The MoRD’s policy shift will help mobilize efforts to tap into NRLM-affiliated SHGs for sanitation lending, as well as promote lending for toilet constructions to all State Rural Livelihood Missions (SRLMs).

Water.org provided consultation to the Ministry of Rural Development (MoRD) by identifying the crucial role that SHGs and NRLMs could play in advancing the national Swachh Bharat Mission and introduced the idea of including ‘toilet construction’ as a loan category under the NRLM to the MoRD, along with various options and suggestions to the relevant stakeholders.

Water.org will leverage this policy shift by increasing our impacts in India. We aim to partner with select SRLMs to pilot in select districts for benchmarking models that can be replicated in other districts and states. Additionally, since all SRLMs are paired with scheduled banks in order to meet NRLM objectives, Water.org can leverage these partnerships to facilitate the creation of sanitation lending portfolios in these financial institutions for their non-NRLM lending activities.

On May 26, 2017, Water.org in collaboration with the India Sanitation Coalition (ISC) and Sa-Dhan organized a special session to launch a new partnership offering called WaterCredit Adoption. The new partnership offering is designed for financial organizations interested in household water and sanitation lending and are seeking a “light touch” technical relationship with Water.org. In additional to technical support, WaterCredit Adoption partners will have access to a series of toolkits to help guide key activities, printed materials for household education, and other non-financial forms of support such as attending learning exchange visits.

Beginning in Maharashtra, Water.org is in the process of piloting WaterCredit Adoption with several of the organizations in attendance and soon thereafter will begin rolling out the new offering to additional states in 2018. Jessica Jacobson, Senior Manager for WaterCredit Adoption, and Jose PM, Program Manager, presented the lending case for water and sanitation and shared some of the success Water.org and its partners have generated including reaching 4.3 million people to date and deploying $196 million in capital for water and sanitation loans. In addition, Mr Udaykumar, CEO and MD of Grameen Koota Financial Services and Mr Sharma, Regional Manager of Activists for Social Alternatives (ASA) shared their experiences of lending for water and sanitation over the past many years.

If you are interested in partnering with Water.org to offer water and sanitation loans in India, please fill out an expression of interest here. 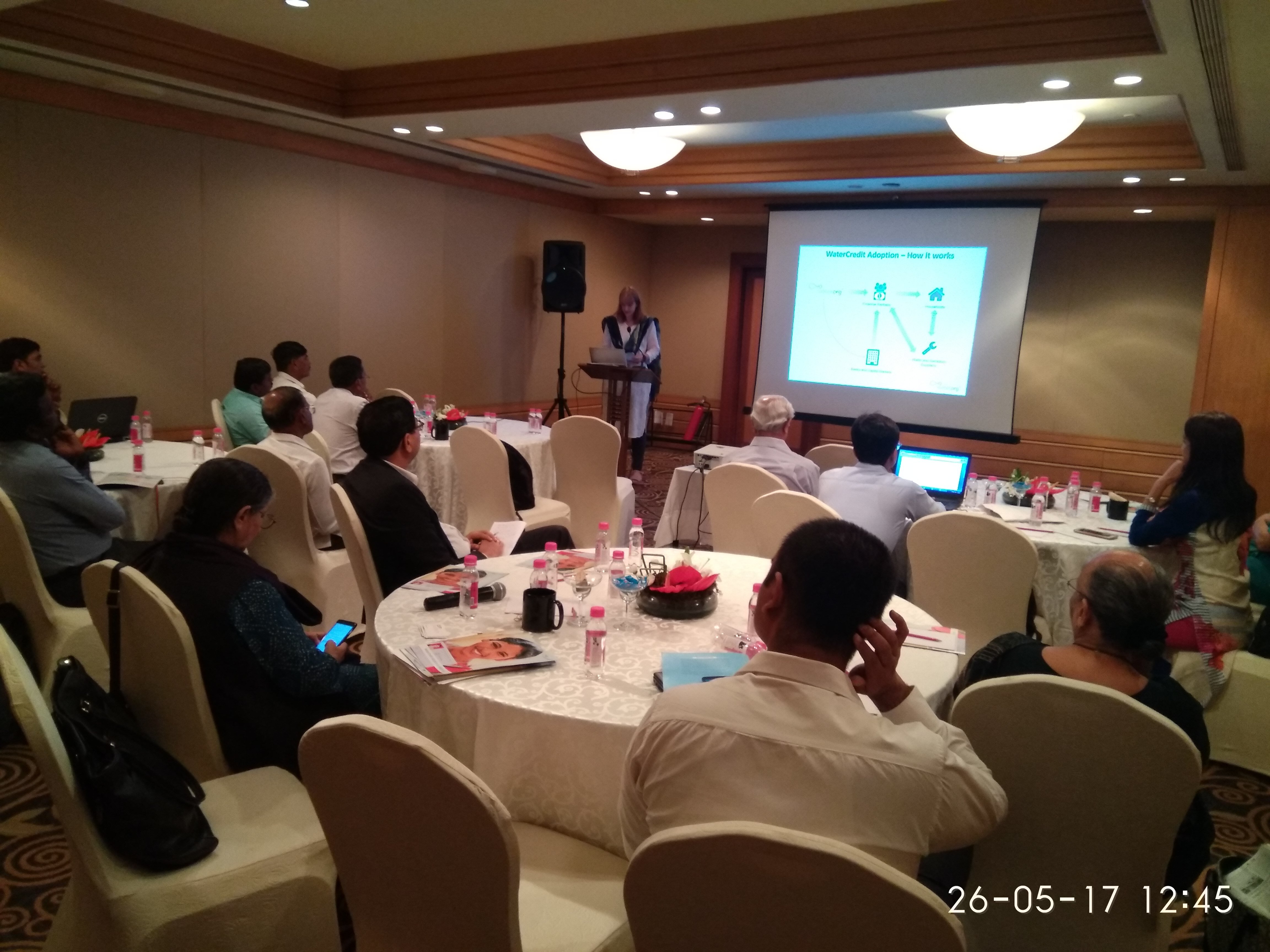 Bedamati Barik, a 36 year old mother of 2, lives in Bramhanpada in Bolangir Town in Odisha. Bedamati’s family did not a have toilet facility in her home and she felt like was ostracized in her community. Her daughter felt shy and isolated at school, stating that her classmates often saw her in a negative light because she practiced open defecation at home.

Hearing this, Bedamati felt compelled to change her family’s situation. She shared her sadness around her daughter’s situation to her Lakshmi Maa self-help group, a group that belongs to Adhikar. Upon hearing her story, Adhikar’s Jeevan Dhara staff members met with her and shared the details of their sanitation loan product. They also began a widespread total sanitation campaign in her town.

Bedamati received a loan of Rs 10,000 to construct a latrine at her home. Her daughter says she is no longer seen as an outcast at school. 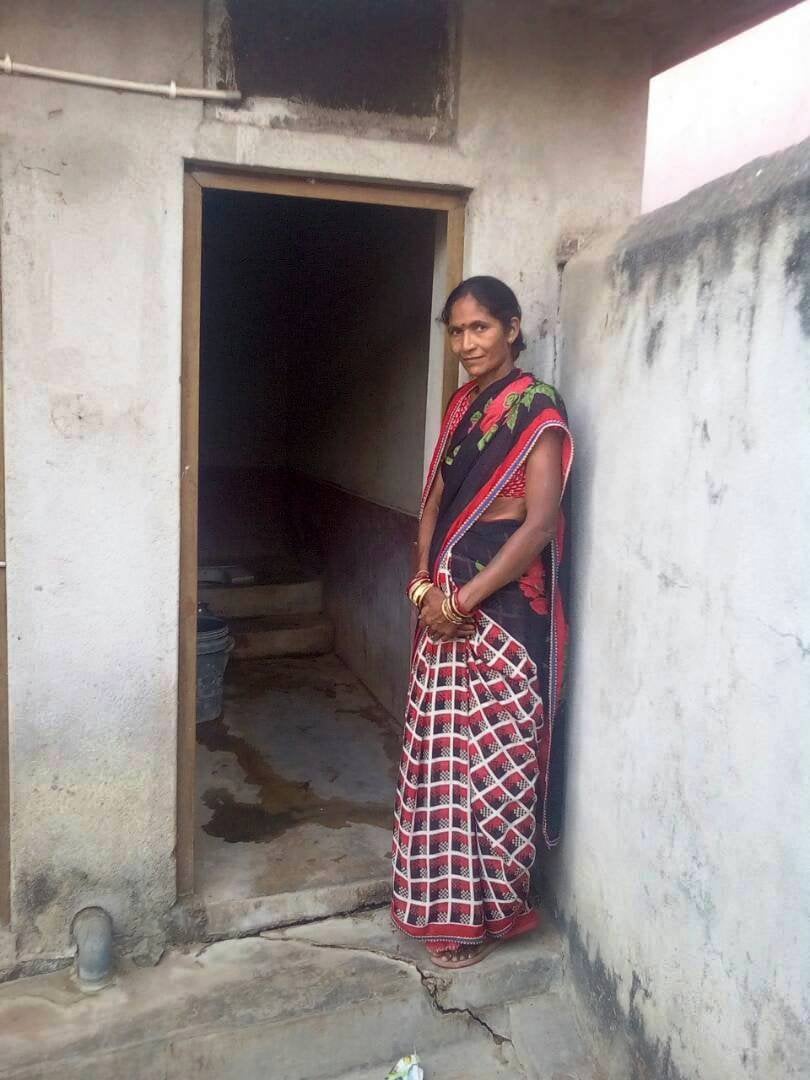 Adkhikar in Odisha: the need and the solution

Social and economic development is impossible without basic social infrastructure and building a strong foundation of human development towards a dignified life for all. Quality of life, health, hygiene and social environment, largely depend on safe drinking water and proper sanitation. The status of water and sanitation rights of urban and rural populations of Odisha show that these basic human rights have not been realized by a majority of poor people.

Availability of safe drinking water facilities remains very poor in Odisha. Only 25.6% of households are covered by piped water supply or by hand pumps in the State as against 88.5% households covered at the national level. Though over 80% of schools have drinking water, there is still a long way to go to ensure all schools are covered with sanitation facilities. The non-availability of safe drinking water and poor sanitation facilities and practices have perpetuated diseases like diarrhea, gastroenteritis, anemia and jaundice.

To address the issue, Adhikar has initiated the program Life Line or Jeevan Dhara with the support of Water.org. Presently, Adhikar is working in 13 district of Odisha with 41 WASH lending branches. Adkhikar is a pioneer, working in most conflict prone district and is the only organization to date to finance WASH in the area.

Jhili becomes a role model in her community

Jhili Mandal is a 37 year old mother living in Katkiapada in Balangir District, Odisha who was tired of paying for doctor’s visits and medicines recurring illnesses. Her children and elderly in-laws, who lived with her, often fell ill with jaundice, diarrhea, and other infections and Jhili didn’t know why. She often had to take care of her sick family members and could not help her husband in their rice and vegetable farming. One day, Jhili went to the local doctor to seek some answers for why these illnesses kept repeating themselves. The doctor mentioned that they were likely connected to her family’s open defecation practices.

Jhili was frustrated after she learned that so much of her hard earned income was going towards preventable medical care and soon met with Adhikar Micro Finance’s Life Line, or Jeevan Dhara, program staff.

Jhili was determined to improve her family’s health and decided to seek a loan from Adhikar’s Jeevan Dhara program for Rs. 10,000 to construct a latrine in her home. Since her latrine was constructed, she has seen a drastic reduction in healthcare needs for her family. She was also able to start her own vegetable business and now saves almost 50% of her income.

Today, Jhili is praised by her neighbors for practicing safe sanitation practices and taking the initiative to better her family’s living conditions. She has inspired other women in her area to seek out Adhikar’s Jeevan Dhara loans to also improve their lives. 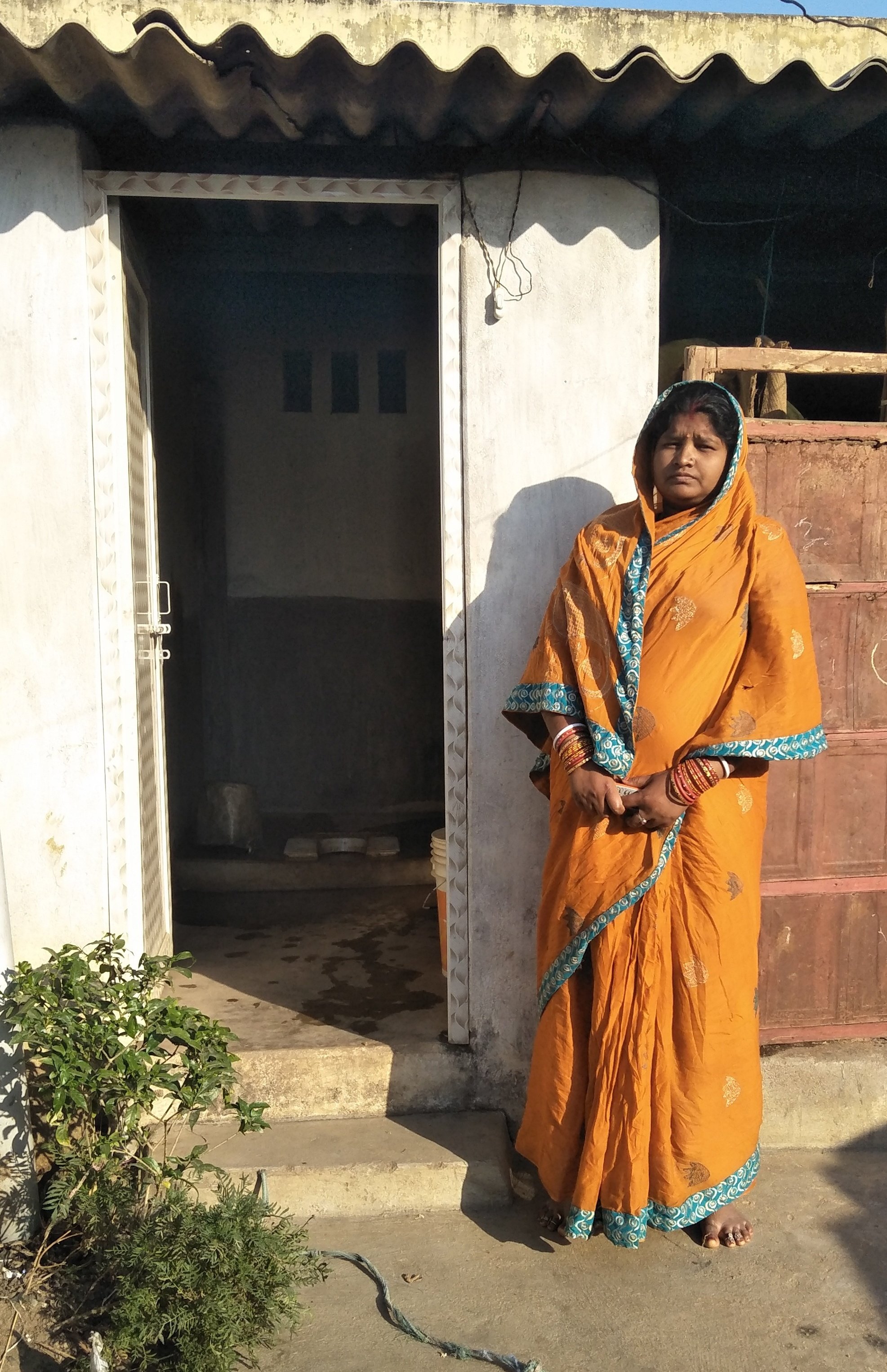 Adhikar understands that open defecation practices are deeply ingrained habits that are often tough to break. To help bring awareness to the dangers of open defecation and to help promote the Jeevan Dhara WASH loan products, Adkhikar conducts the following demand generation activities:

Through these demand generation activities, Adhikar has been able to reach over 18,000 female clients and improve the lives of over 86,000 people.  More than 12,000 WASH infrastructures have already been constructed throughout Odisha. Adhikar aims to reach 200,000 people by 2020.

A poor village decides to bring sanitation closer to home

Mrs. Porkodi lives with her husband and two children in JJ Nagar village in the Tiruvalluvar district, a very poor village about 45 kilometers away from Chennai city. Most of the villagers are strong in their traditional practice of open defecation. Over the last three decades, the village and its surrounding area has produced low toilet coverage data. Less than 5% of villagers have a toilet, but many are found to be unhygienic or improperly constructed. Activists for Social Alternatives–India (ASA-) identified this village as needing sanitation improvements and began their project in 2016. At the outset, ASA had difficulty discouraging people to away from their open defecation practices. They explained that open defecation has a direct connect with the infant and youth mortality rates in the area. But for Mrs. Porkodi, the encouragement to change behaviour came from her daughter, who was studying at a nearby government school.

At school, Mrs. Pokordi’s daughter was taught about the importance of using a toilet, standard hygiene practices, and menstrual hygiene practices, as a part of ASA’s WASH intervention. Her daughter became an important change agent and educated her mother about the importance of sanitation.  Mrs. Pokordi was convinced that a toilet in her home was necessary for a healthy life—the village is remotely located with no safety for girls or women. She decided to seek out a sanitation loan from ASA in the amount of INR 30,000.

After quick processing and approval of the sanitation loan by ASA’s Thirunindravur branch, she started constructing a toilet near her house. Initially, she was unsure if the loan amount would be enough to cover the cost of completing the toilet, but she was advised by a local mason who provided technical support on the cost of constructing a twin pit model latrine and a local fabricator who supplies construction material.

Her twin pit model has served as motivation for other villagers to seek a WASH loan to construct similar toilet at low cost. Mrs. Porkodi has not only ensured the wellbeing of her own family, but has also served as an important change agent in her village to stop open defecation. 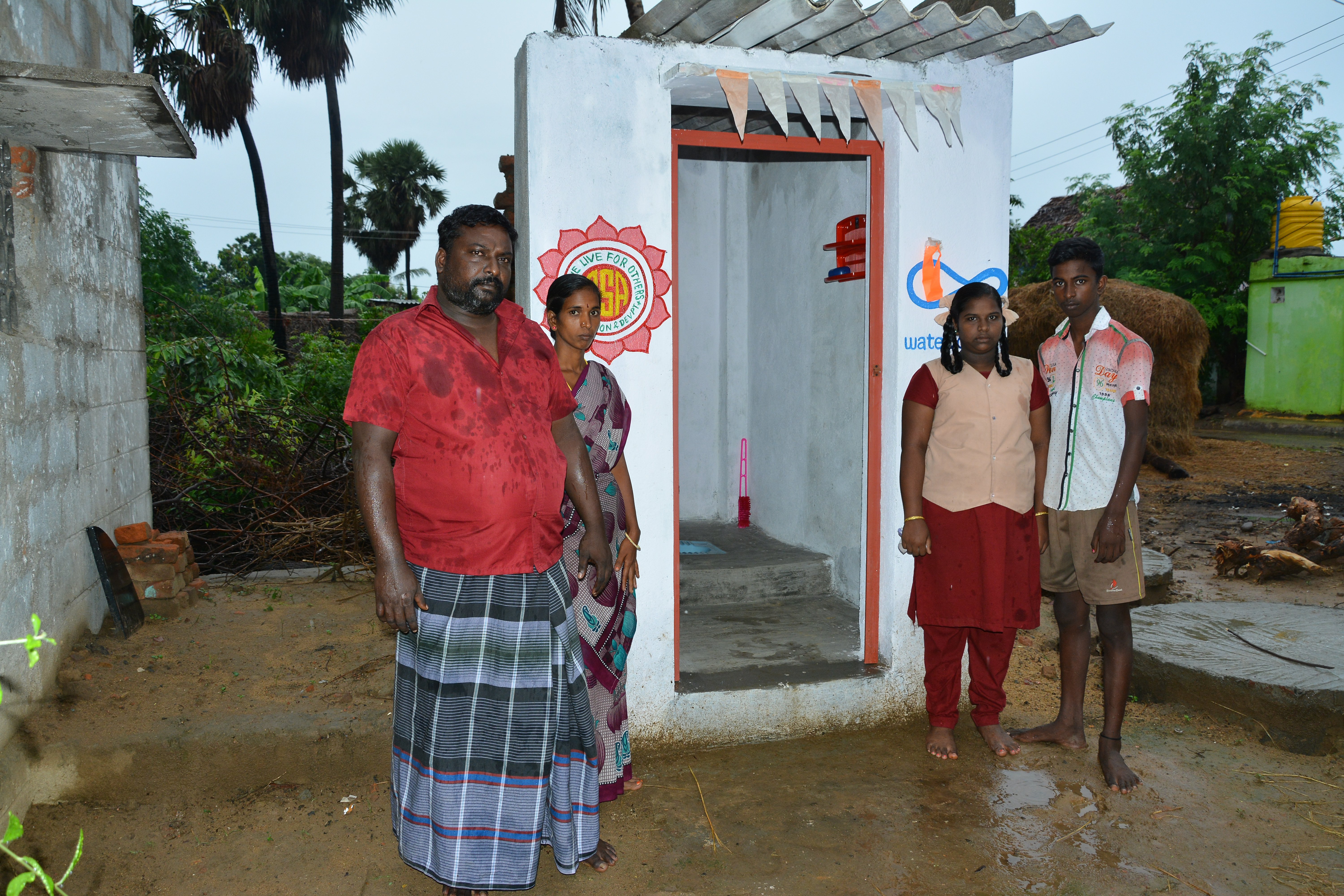