Media discussion and dialog with Water.org:
The close connection between clean water, sanitation and poverty

Water.org hosted a media session in May 2017 in Malang, East Java entitled “Media Workshop and Dialog with Water.org: The Role of the Media in Access to Safe, Clean Water and Healthy Sanitation in Indonesia”. During this session, participants discussed the low level of community awareness that currently exists in Indonesia concerning open defecation, despite the assistance given to build several toilets.

Ira, a journalist with the Malang Pos, said, “Usually we are only interested in water, sanitation and hygiene (WASH) issues when they involve victims in cases like diarrhea, floods and the water crisis, as well as demonstrations from Regional Drinking Water Company (PDAM) subscribers over tariff hikes. Now there is credit for toilets, credit for water, and stories about PDAM that are different.”

The discussion and dialog provided an understanding and a new awareness about the management of water and sanitation in Indonesia, with several sources putting forward innovative solutions to the problem. Ratih Hardjono, an adviser to the Water.org Indonesia Advocacy Program, hopes the discussion will enrich the work of journalists by providing them with clear and more objective information.

“The role of the media is very important when it comes to providing an understanding of this problem. Clean water and poor sanitation in the community are identified with poverty. This is both a serious and a basic matter for the country. The media can play a key role in advocating for this issue to all parties; not only to the community, but also to decision makers,” explained Ratih, a former senior journalist with Kompas, an influential national daily in Indonesia.

Ratih added that the media could maximize its role as an agent of change by broadening the minds of the public about the significance of access to clean water and sanitation, which represents the right of every person.

Around 60 journalists from West Java, Central Java and East Java have now participated in the activities with Water.org, which will be followed by training, a writing workshop and competition for journalists. (Musfarayani/Water.org Indonesia) 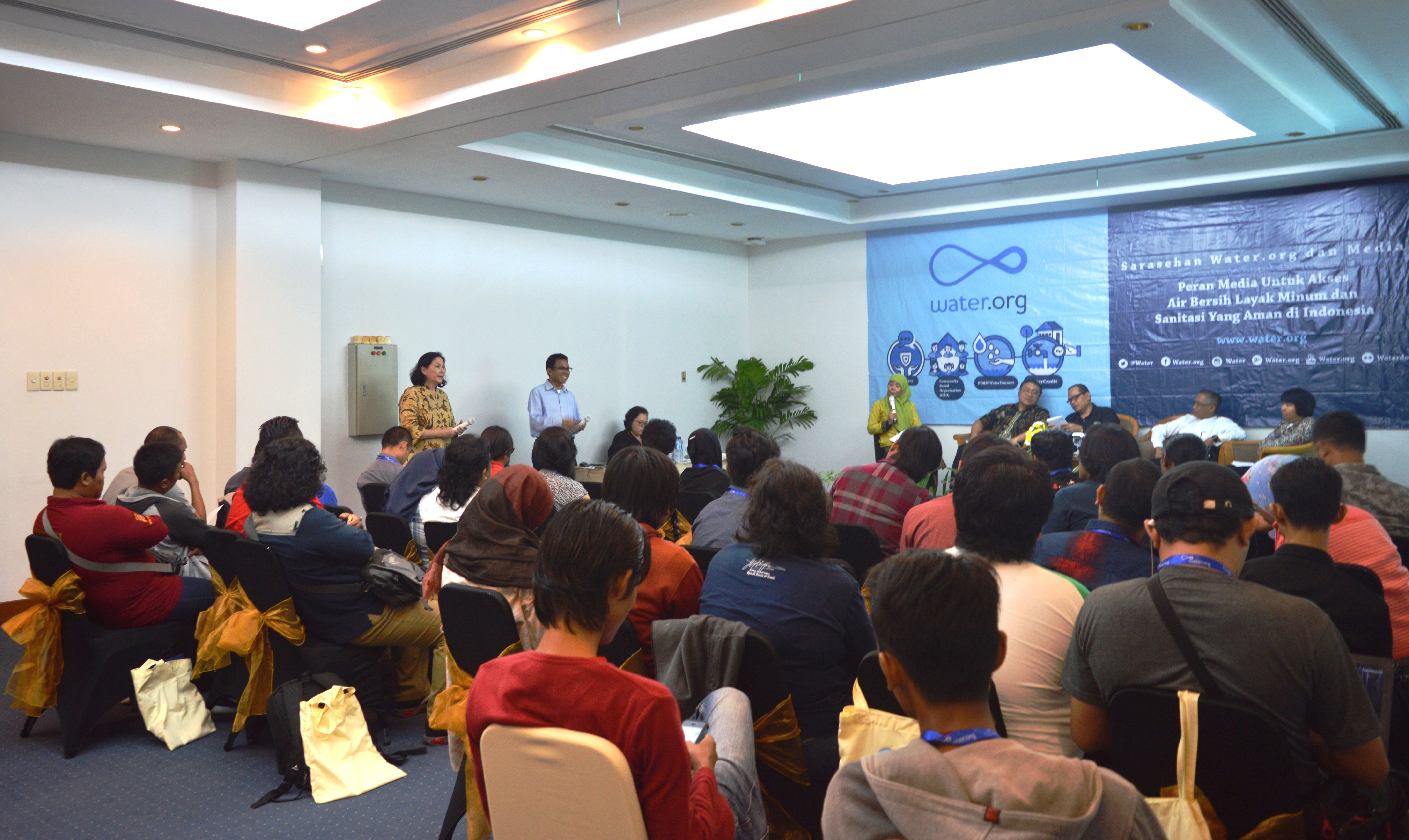 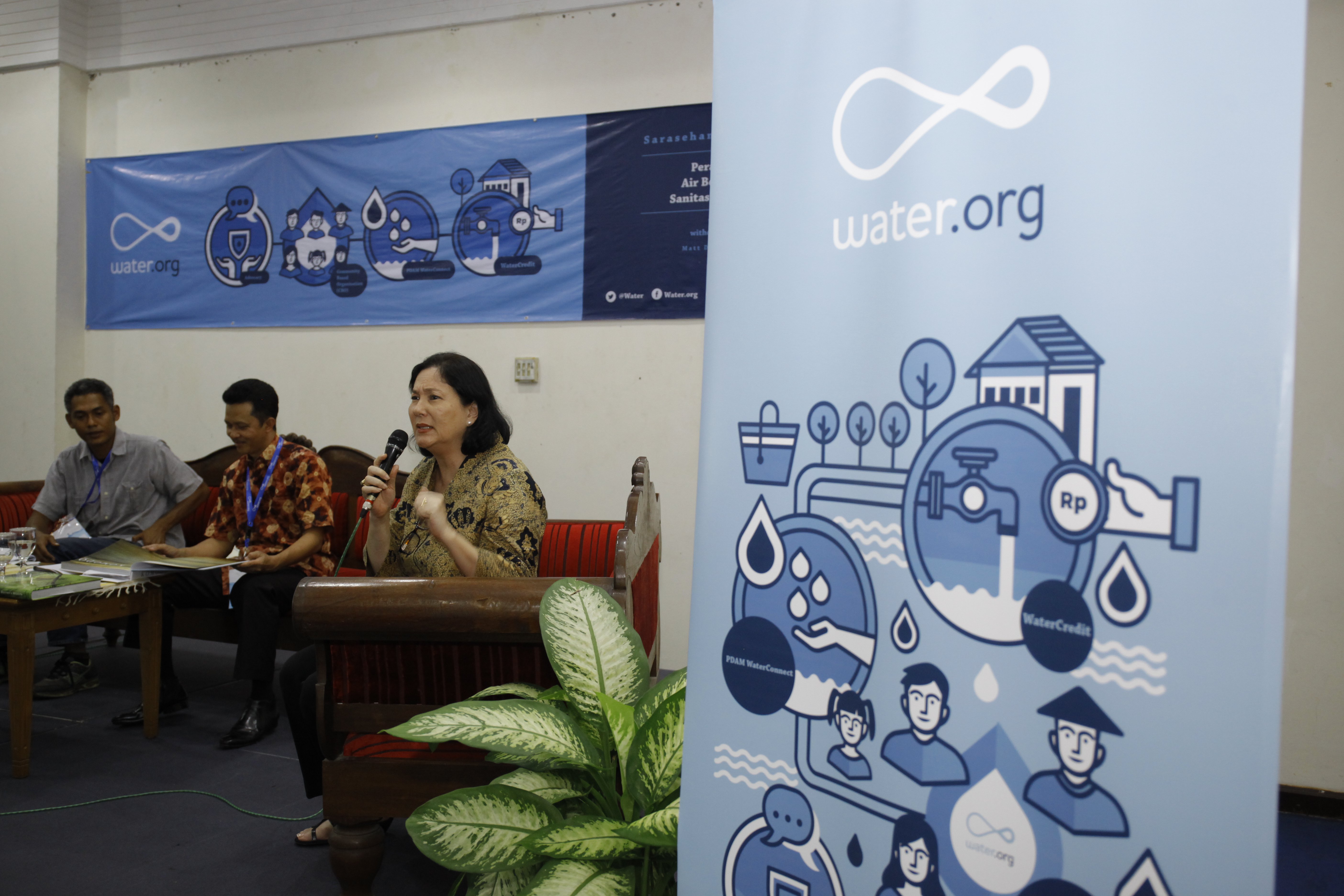 Every morning and afternoon the only spring in the village of Gedang-gedang in the Madura region of East Java is busy with residents queueing for water at the spring, nicknamed deg-deg to mimic the sound of a person drinking water. Sudhana, 50, and his wife often go to the deg-deg spring in order to meet the drinking and cooking needs of their family. Sudhana and his wife can go up to three times in the same day on foot to the spring, which is located around 2 km away. He carries two buckets of water, each containing up to 25 liters each.

One day he saw his neighbor, an artesian well worker, sink a well at a house in the neighboring village. He began thinking about how an artesian well and water storage tank could help relieve many of the pressures his family felt regarding water collection. However, when he heard that the cost of building such a well was Rp. 30 million, he began to wonder how he could ever afford it.

“When I added it up, it was Rp. 30 million in total. Where would I get the money?  But I must have facilities at the house to obtain water. I feel sorry for my wife if she has to draw water from the spring. As we get older, it will become much more difficult to get water. Aside from that, if I have my own artesian well and water tank I could also help my neighbors whose lives are even more difficult than mine. Later I would be able to earn more because my time would not be wasted going to the springs to draw water,” he explained.

After selling some of his assets and borrowing some money from his neighbor, Sudhana had Rp. 20 million-- still lacking 10 million needed for the well and water storage tank. He thought of borrowing again from his neighbor or family, but he knew that he would be meeting one of the field staff of the Gapura branch of the (BMT NU), a shariah-based microfinance institution. After listening to his situation, BMT NU Gapura was ready to lend him Rp. 10 million. The requirements were that he must provide BMT NU Gapura with a guarantee in the form of a Motor Vehicle Ownership Logbook (BPKB). Sudhana said the process was quick and easy.

“Now everything is installed. I enjoy my life, which is a lot easier these days. I can give the water to neighbors, those who disadvantaged, or who are poor. This is my charitable act for them. There are also several neighbors who want to connect to the water from my tank so that it can go directly into their houses. They pay me monthly, and this helps me pay my loan installments,” he added. (Musfarayani/Water.org Indonesia) 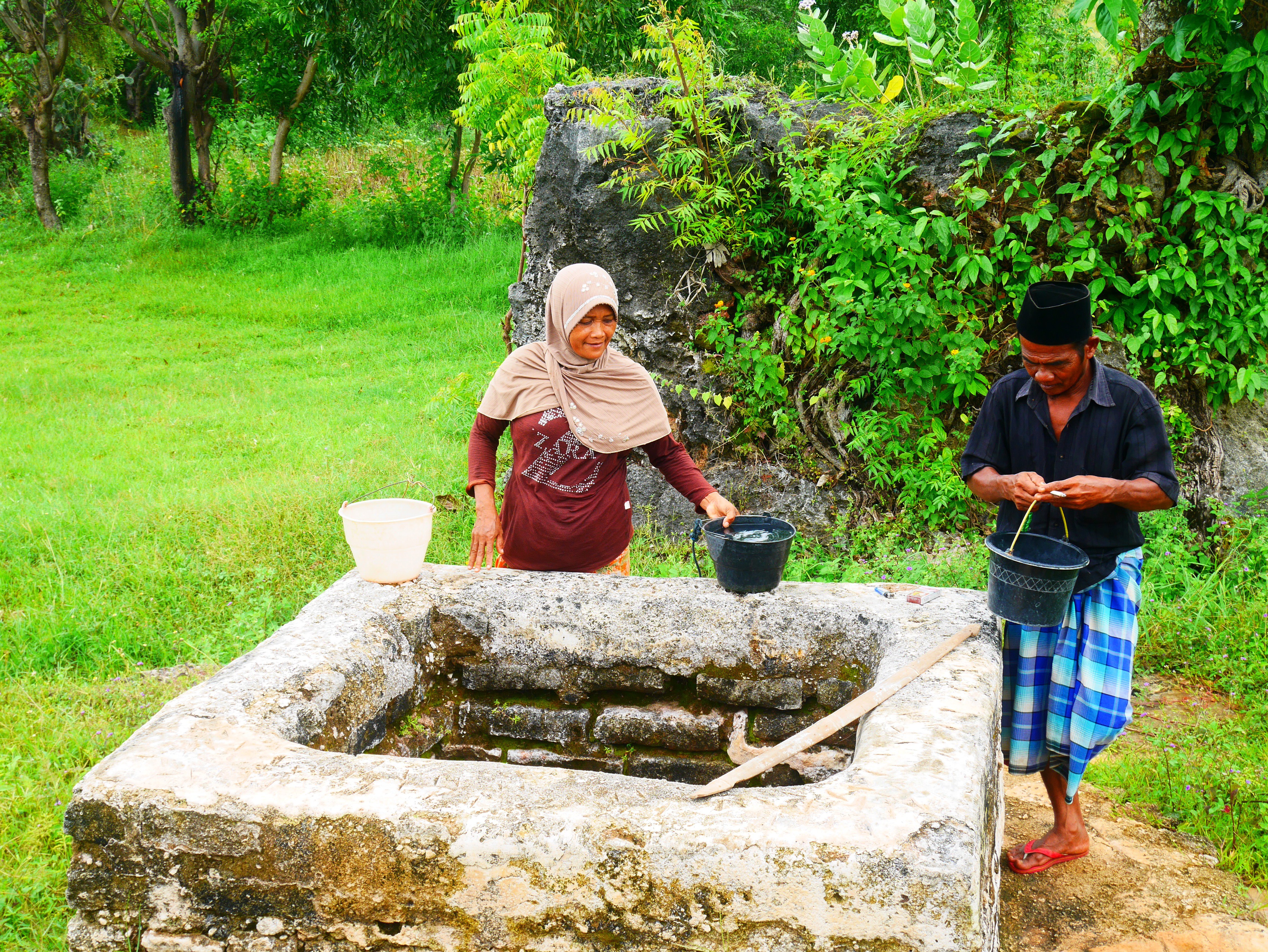 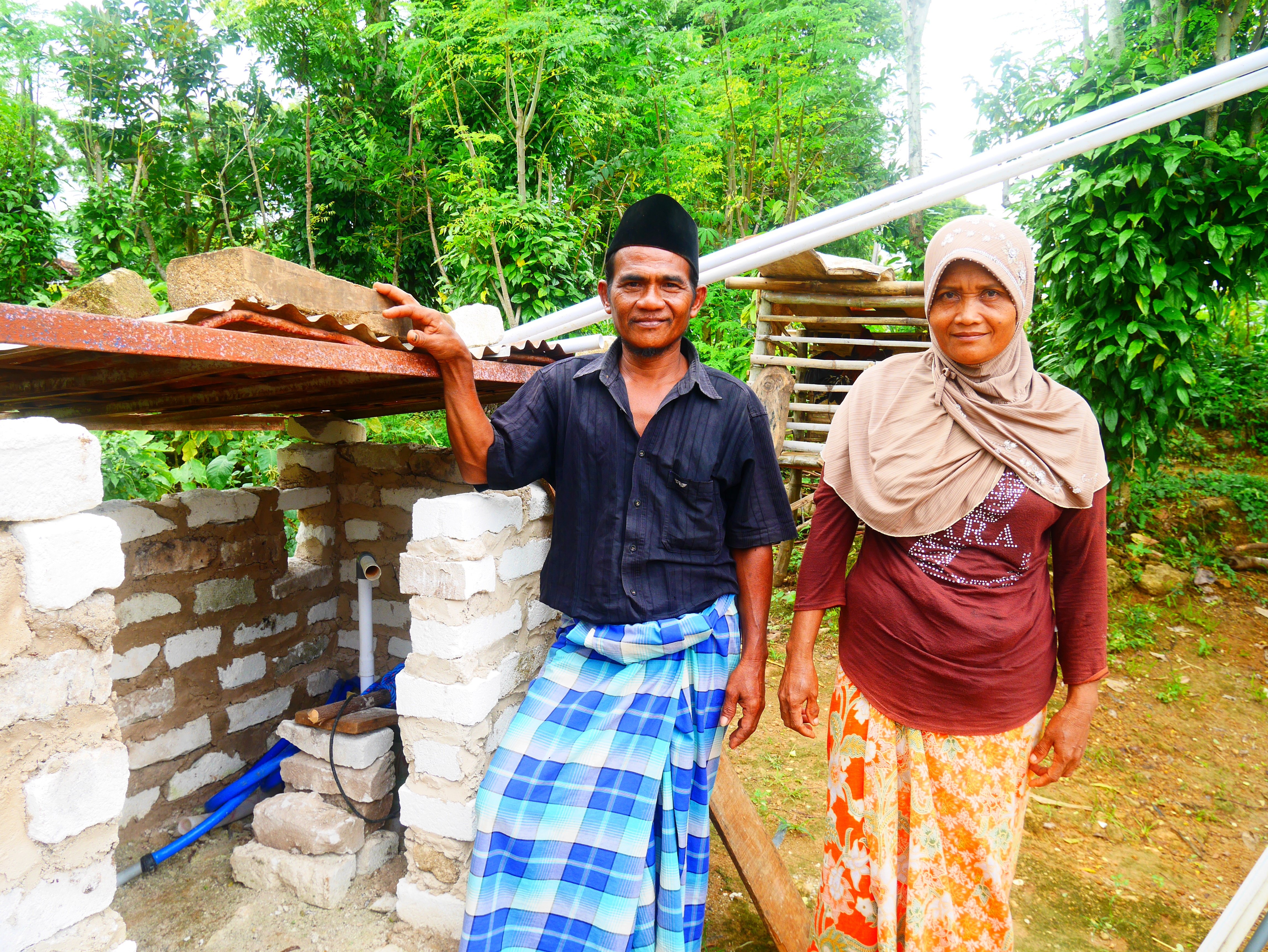 Rosalinda learns about the safety and convenience a toilet brings

Rosalinda Silebio is a 51 year old member of NWFT’s Project Dungganon who resides at Brgy. Lukap, Canlaon City. Her three children live with her and they have a small sugarcane plantation as their source of living.

She and her family live in on a small house on their sugarcane plantation. At the time of construction, they did not consider building a toilet since they ran out of budget and thought they would defecate in the plantation.

In one of their center meetings, Green Product Staff came over to educate and offer WASH products. At the following center meeting, she asked the loan officer how she could avail a WASH loan. She then applied for a loan and when it was released, their toilet was constructed immediately. Currently, Rosalinda and her family enjoy the convenience and safety that their sanitary toilet provides. 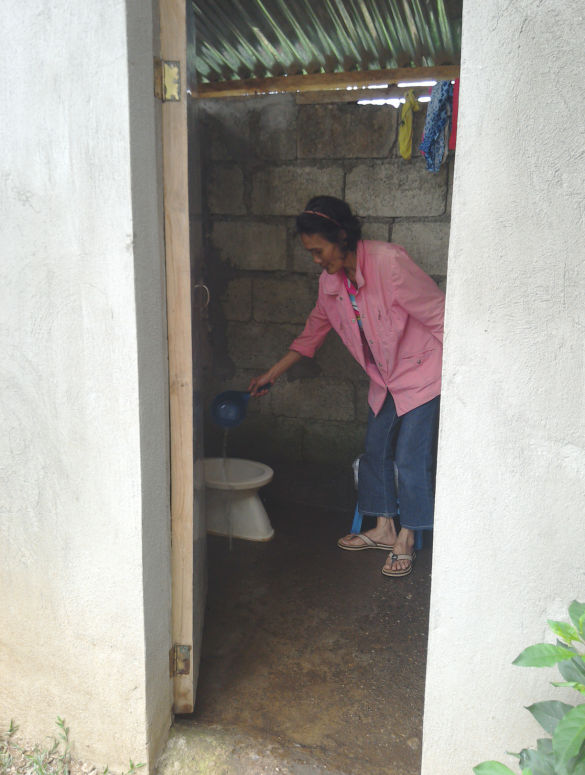 Khofifa, 16, has just arrived home from her school in Lapadaya village in Madura, East Java. Still wearing her school uniform she goes straight to the kitchen, approaches the water tub that has been left open since last evening, ladles out the water using the dipper, and then takes a drink of water directly from the end of the dipper.  Yes, Khofifa drank the raw, unprocessed, water just like that.

“We have been drinking raw water since we were little. Directly from the water tub, just get the dipper, and drink. Our parents did this, as did our grandparents. So it’s difficult to break the habit of drinking raw water,” explained Khofifa’s older sister Khumwateroh, 29.

“In school, our teacher says it’s best to boil the water. It’s healthier because it kills the bacteria, but boiling water is a such a bother.  My mother says that it’s important that the water is pure and then just read the Bismillah, a short prayer. God determines it,” explained Khofifah, who smiled with certainty at the thought.

“In the days of our ancestors, the natural conditions in Madura were good-- the forests were still looked after and you perhaps could drink the water directly without boiling it. Nowadays, nature has changed. I feel the freshness and purity of water here is no longer the same as it once was. This is all the more so in cases where the water has been stored in an uncovered tub. We can never know if there are animal droppings in it. It is prone to all sorts of contaminants,” she added. (Musfarayani/Water.org Indonesia)

When the People’s Shariah Credit Bank (BPRS) of Sumenep District, Madura, a local government owned micro financial institution, issued its Sadar Bersih financial product, Ellya greeted it enthusiastically. For household-level community health workers and the midwives deployed to ensure teach pregnant women and children the dangers of  drinking raw water, the Nazava Credit provided the answer to those who find boiling water to be bothersome.

Khumwateroh’s awareness was finally triggered when she went for her pregnancy check-up at the community health center. The midwife explained the bad consequences that would follow if she continued to drink raw water, especially for her unborn baby. Khumwateroh then decided to turn to the offered alternative solution.

“The midwife explained that raw water has a lot of bacteria that can have a negative impact on the fetus.. The midwife offered a filter. The cost is Rp 300,000. I explained this to my husband and he agreed that we should get a water filter. We gave a ring as collateral to buy the Nazava filter on credit. I want my child to grow up healthy and I wish to set a good example so that he has a better and healthier life,” explained Khumwateroh. 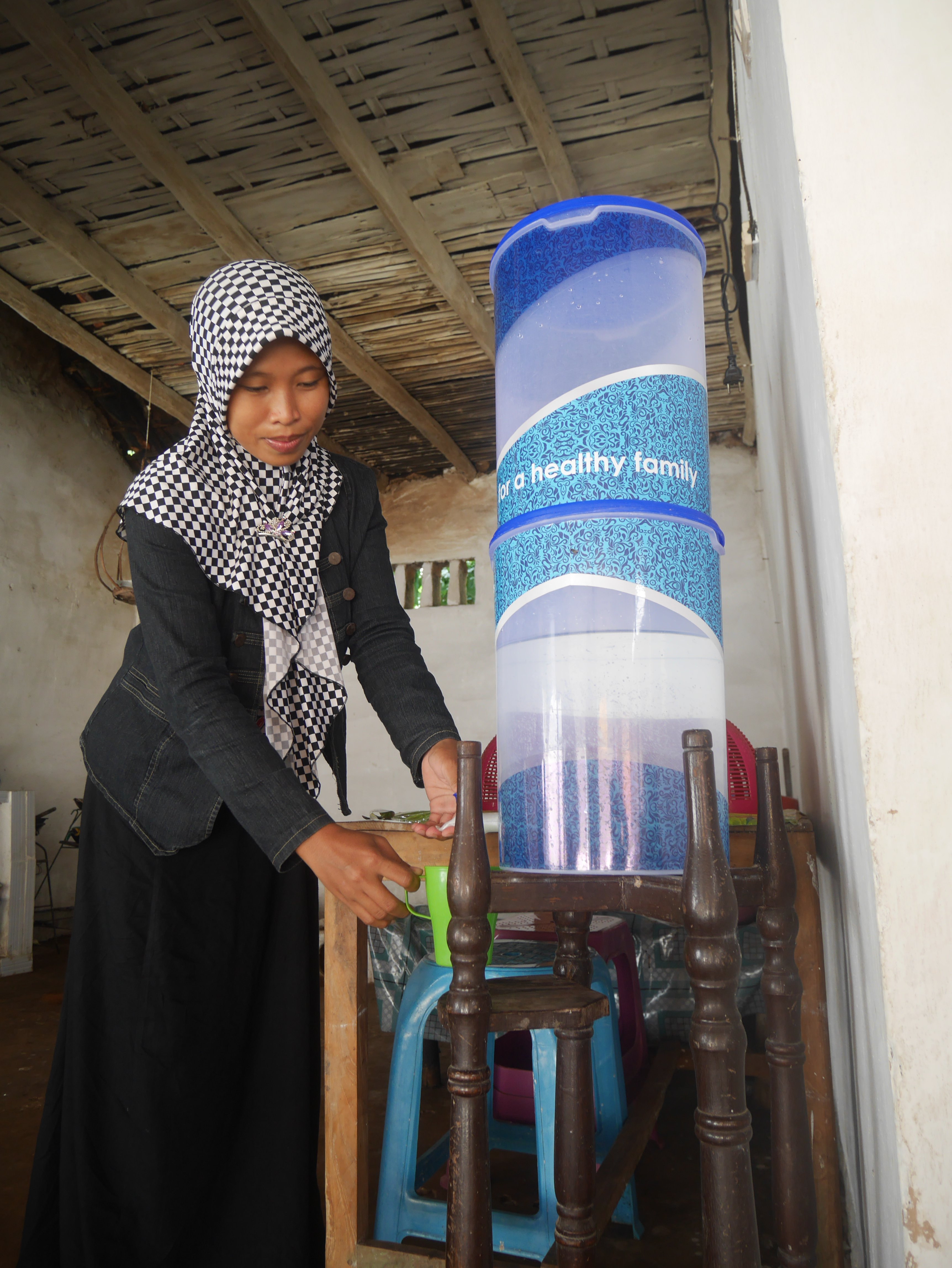 Emy Alom is a 35 year old member of Project Dungganon. She lives with her husband and four children in Sitio Batilo Brgy. Pook, Hinobaan, Negros Occidental. Their house is made of woven bamboo and they don’t haven’t had a toilet since they were married. They used the bushes near their house as a cover when defecating. They felt uncomfortable defecating outside and felt unsafe for their daughters when defecating at night. They wanted to have toilet but they have no enough funds to finance the construction.

During their center meeting, their loan officer announced that there was a new loan product that is being offered for sanitary toilets, water filters, and water connections. She shared the information with her husband when she returned home, but they both decided not to avail the loan in order to save money.

As the days progressed, Emy’s desire for a sanitation loan grew but the idea of additional weekly payments held her back. A few weeks later, she was still thinking of the safety of their daughters and the inconvenience of defecating openly. Again, she talked to her husband, and convinced him that they needed the loan. Her husband agreed that the benefit outweighed the cost, and they decided to seek out the loan from NWFT. Emy applied for a sanitation loan amounting to PHP 10,000 at the very next center meeting.

Today, Emy and her family enjoy the benefits of their sanitary toilet and is proud that she could provide safety for her daughters. 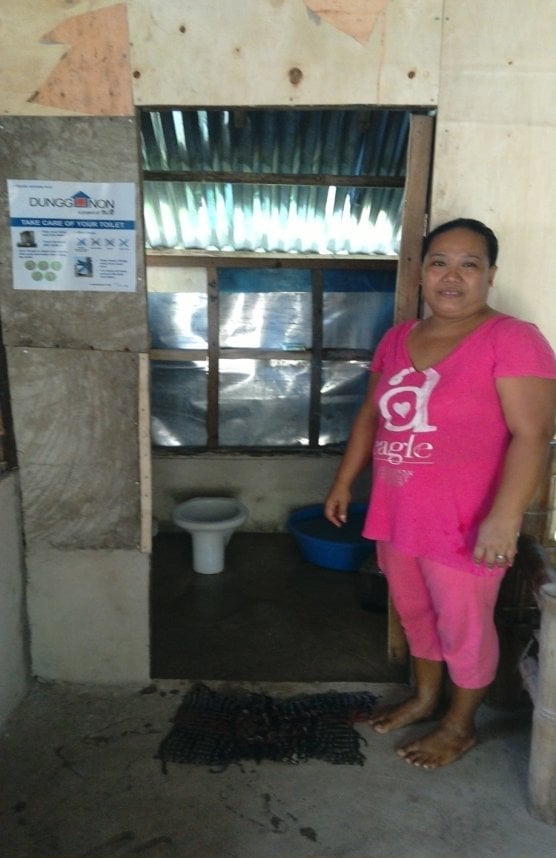