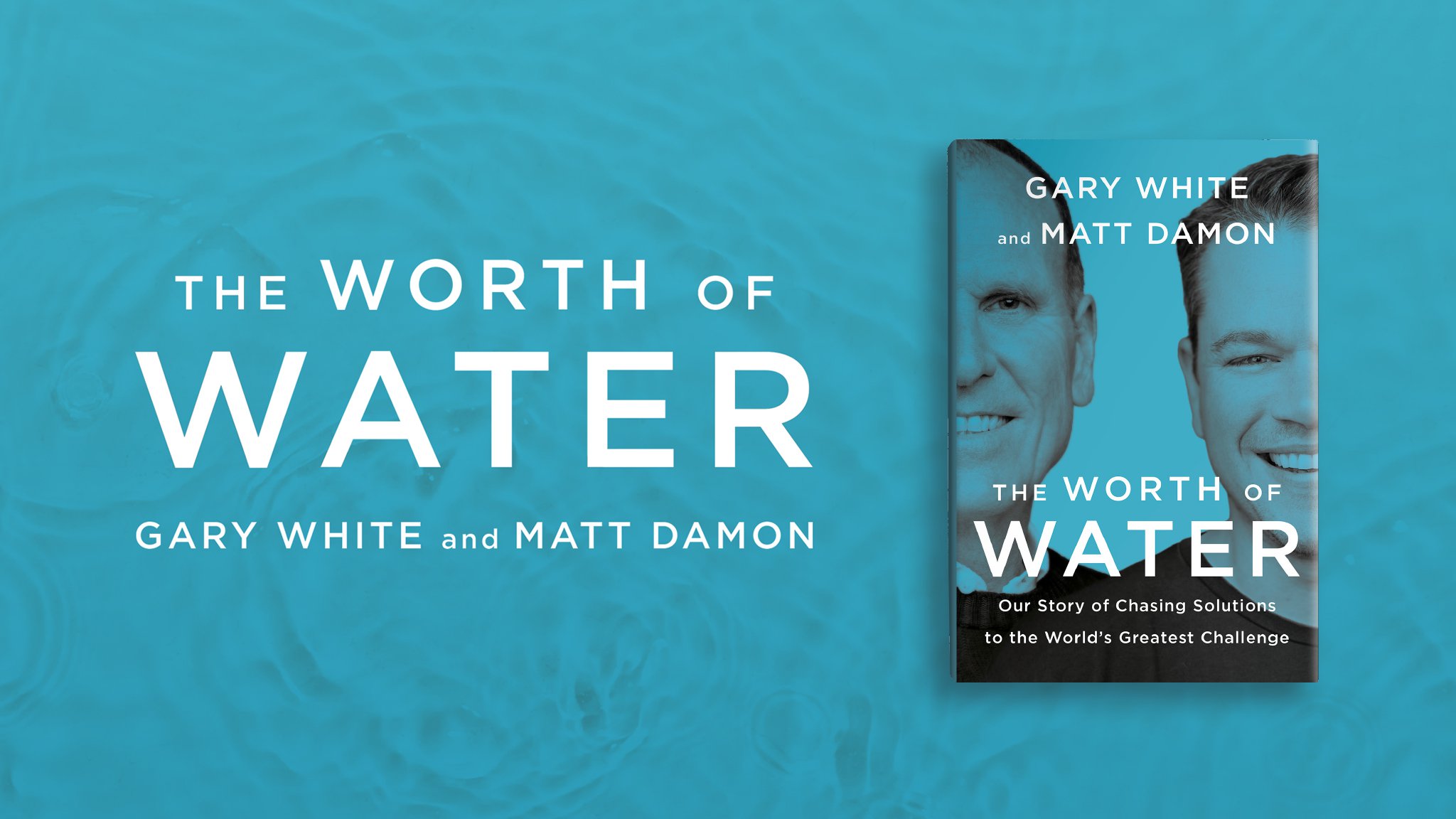 The Worth of Water

On any given morning you might shower, make coffee, flush your toilet and think nothing of the role that water plays at each moment.

And it is solvable. That conviction is what brought together actor Matt Damon and water expert and engineer Gary White. Over time, they and their organization, Water.org, found a solution that works. Working with partners across East Africa, Latin America, South Asia, and Southeast Asia, they’ve helped more than 43 million people get access to the safe water or sanitation solutions they need to survive and thrive.

The Worth of Water invites us to become a part of this effort—to match hope with resources, to empower families and communities, and to end the global water crisis for good.

We talked with Gary White about the inspiration behind and process of writing The Worth of Water, his book with co-author and Water.org Co-founder Matt Damon.

What inspired you and Matt to write a book?

The people we’ve met and worked with around the world—that’s who inspired us. The mostly women and girls who literally carry the burden of providing safe water for their families inspire us every day. We feel incredibly lucky to be part of their story, and we’re excited to share it.

Every day, they show that a massive problem—the global water crisis—can be solved by resilient people and innovative ideas. We want the world to see how that happens.

Do you have a favorite story told in the book?

Mama Florence's story spoke to the entrepreneur in me. She lives on less than three dollars a day and used to spend much of her time riding a bike to collect water for her family.

Then she got a $275 loan. With that money and access to local resources, a water pump and storage tank were installed in her home. She uses the water she collects to grow vegetables and uses the vegetables to feed some pigs she’s started to raise. She’s also using the water to make clay bricks—and she’s selling those, too.

Now that Mama Florence no longer has the burden of constantly searching for water, all that potential came rushing out. Imagine that story repeating itself—in neighborhoods, in villages, in countries. Imagine how the world might change.

Did you learn anything new about Water.org while writing?

It filled me with gratitude and hope to recall just how many incredible people have contributed to the success of our work over the past thirty years. People within the organization whose brilliance and hard work turned ideas that initially seemed impossible into reality. Organizations in countries across the world who were willing to take a risk and partner with us. Early donors who made a big bet on a team with an unproven but potentially game-changing idea, as well as the many who now support our proven, powerful solutions and continue to give. And of course, the millions of people who decided to take out water and sanitation loans and invest in a bright future for themselves and their families.

"Matt and I are the ones narrating this story, but really, it’s not our story. It belongs to all the people around the world who have lived it, who are achieving something amazing together."

The scale of the water crisis can feel intimidating – what would you tell someone who is eager to help but doesn’t know where to start?

As you’ll read in the book, if either Matt or I had let our fear hold us back, we would never have started in the first place. We knew we were going to make mistakes, and we made good on that prospect! We’re absolutely convinced that even the biggest, most intimidating problems will yield, in the end, to the determination of human beings around the world to make progress.

This is just as true for individuals as it is for organizations like ours. What if every person who reads our book commits to empowering one person with safe water or sanitation? With a $5 donation to Water.org, they can give someone access to a tap or toilet that will transform their life.

True, one $5 donation doesn’t change the world, but it will change somebody’s world.

What do you hope readers will take away from The Worth of Water?

I think a lot of people think that problems like the water crisis are so big that they’re permanent parts of life on this planet. The single most important thing we want them to take away from this book is that the crisis is solvable. Not “hopefully, eventually, theoretically” solvable, but right here, right now.

There’s one more thing we really want readers to know: the people affected by the water crisis are the very same people who can lead the solution. The biggest breakthrough we had at Water.org was to invest in them. And because of that, today, 43 million more people have access to water and sanitation. These people are breaking the cycle of poverty, lifting up entire communities, and making our economies more resilient to global shocks like pandemics and climate change.

So many great global challenges are more solvable than we think—if the people who are facing those challenges, who have great capacity to solve them, are empowered. That’s how we’ve been able to change 43 million lives with safe water and sanitation.